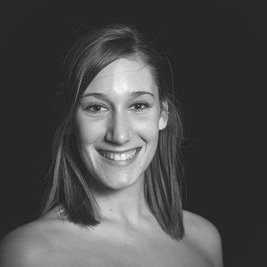 Originally from the south of France, Mathilde commenced her training in a private dance academy. Through the rich training she received in classical and modern dance, she was able to explore many artistic horizons, especially after receiving the Examen d’Aptitude Technique for Jazz in 2012 at the age of 20.

During her time in Paris, she grew both artistically and personally, developing her sense of ambition and widening her horizons, due to the multidisciplinary approach of the educational team. She discovered contemporary dance which further evolved her movement style and freed her sense of expression.

Performing at the Academie inspired her to join the Dance in Art Junior Company (Haarlem, The Netherlands), directed by Ms. Martine VAN SANTEN. Here she had the opportunity to collaborate with Ms. Rianne SLENEMA (Korzo production), Ms. Ester NATZIJL (NDT), Mr Antonin COMESTAZ (Kozo production) before the director entrusted her to create her first choreographic piece: NANAGAMI (a contemporary piece for 10 female dancers).

Performed throughout Amsterdam and the Netherlands, NANAGAMI was entered in and won the Grand Prix de Paris in February 2016 (a choreographic competition judged by Mr Thierry MALANDAIN, the Angelin Preljocaj Company and stars of the Paris Opera Ballet). Dance in Art has been the springboard which propelled her to new heights both personally and professionally.

She then joined the Programme ICE (Salzburg, Austria) which allowed her to choreograph, create and collaborate with the dancers of the Salzburg Experimental Academy of Dance (SEAD), directed by Ms. Susan QUINN, as well as participate in numerous European festivals.

At the moment she has her own company Ikhone.